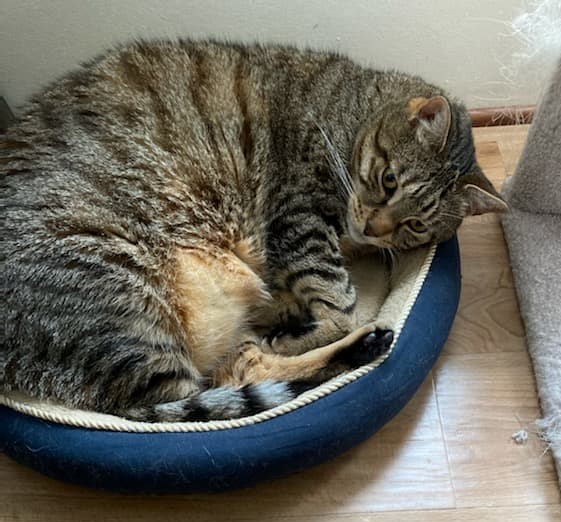 Are you looking for a big marshmallow to add some love to your home? If so, Bacon might be the right boy for you. He came to us after his owner lost her housing. We were told that he is a Savannah Cat cross, and he certainly is a large cat, but there is really nothing about his personality that reflects the Savannah breed.

Bacon is a quiet boy who can be a bit shy when meeting new people and encountering new things, but he is curious and likes to investigate. He warms up quickly with a little bit of time and will be your best friend once he’s used to you. While Bacon isn’t very playful or high energy, he likes to be around his people and be involved in what’s going on around the house. While he doesn’t want to live in a busy household, one where there are people in and out for most of the day, or where there are older, calm kids (teens) would be ok.

Overall, Bacon is in fairly good health, although he is obese due to his previous lifestyle. He is on a diet and has lost a bit of weight so far, but it will be important for him to continue on his weight loss journey in his new home. A smaller home (like an apartment or rancher) might be best for him so that he can easily move around the home. A few years ago, Bacon had a urinary tract infection, which the vet believes was due to being overweight and in a stressful living situation. He hasn’t had any more problems since but he has been on a food from the vet that contains a urinary protector. It is recommended that Bacon stay on this food at least until he has settled into a new home and has lost some weight. Bacon is a social eater and likes to be pet while he eats.

Bacon is a pretty low key cat, and isn’t much into playing. If you put a toy right in front of him, he will bat it around, but he will not get up to chase a toy. He also likes to ‘hunt’ moths and lizards that get into his foster home from time to time, but his version of hunting them is to watch them flit around the house without lifting a paw. He will get up to greet his foster family when they get home, and likes to join them in the bedroom at night.

If you would like to learn more about Bacon, please visit https://victoriapets.ca/adoption-process/ to complete an adoption application.