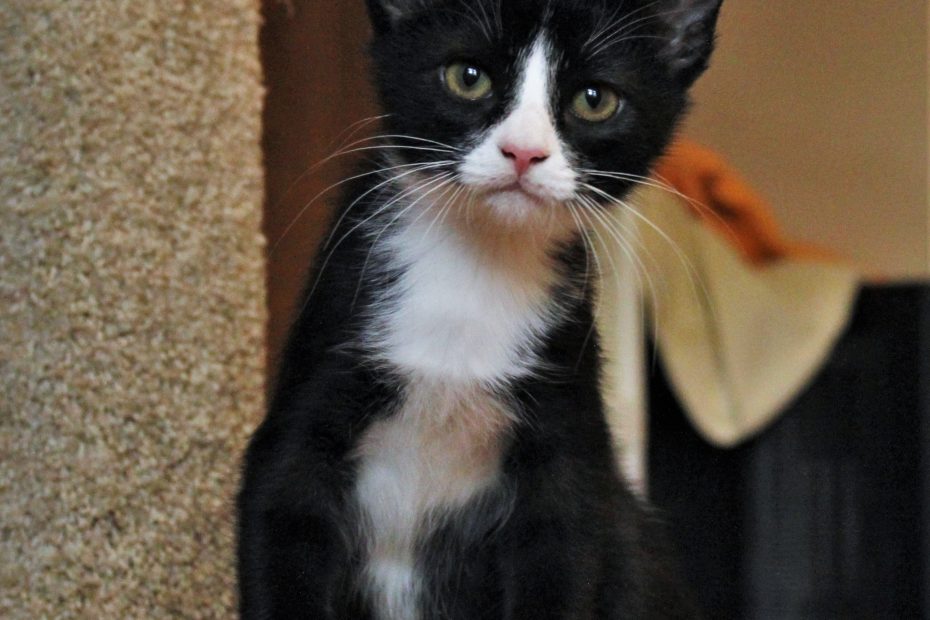 Schrodinger (aka Shrodie) and his siblings are the sweetest kittens and they’re lucky to be alive. Their mother was a feral cat who is believed to have been hit by a car because one day she started limping very badly. Our rescuers were called in to catch momma (named Trixie) and get her help. After a few days we were able to catch her and take her to the vet. Fortunately for Trixie, her only injury seemed to be a dislocated hip, which was able to be fixed with surgery. Unfortunately, when Trixie was at the vet they discovered that she had engorged mammary glands, which meant that she had nursing-aged kittens somewhere. So our rescuers headed back out to try and find the kittens. Luckily, they were found very quickly and seemed to be in pretty good shape, although at this time they had been without their momma for 3 days at the tender age of 5 weeks old.

Shrodie was the last of the kittens to be caught, and what a marathon catching him was. The kittens were hidden well by their momma under a massive pile of wooden debris and garbage, so our rescuers weren’t able to get into where the kittens were hiding. They had to use humane traps to try and catch the kittens, and Schrodie was having none of it. Although our volunteers tried very hard and spent hours every day trying to reach Shrodie, he was very fast and would keep out of their reach. It took almost 50 man hours over 6 days to finally catch Shrodie. Although he was only 5 weeks old at the time he was found, he had to quickly learn how to eat solid food in order to stay alive. While they were working on catching him, our volunteers put out food and water for him several times a day in an effort to keep him alive while they tried to rescue him. He was finally rescued almost a week after his siblings were caught, which means that this poor guy was on his own for a very long time at a very young age.

Due to everything that he went through before being rescued, Shrodie was very scared and pretty tough when he first came to us. Despite this, he actually came out of his shell before his brother, Salvador did. He discovered that TLC is a pretty great thing and he quickly warmed up to his foster mom. Because of everything that Shrodie went through at such a young age, despite being friendly and having a great purr when he’s cuddling, he is the most reserved of his siblings. He is always the last to venture into a new room, and the last to approach a new person. Once he’s comfortable, he is a sweet guy but prefers to explore things on his own time. He will climb on your lap if you’re sitting down, but does not really like being picked up.

Shrodie was not in the same foster home as his siblings initially so he has had no exposure to dogs, except for the ones he saw at the vet (and he was scared of them in that situation). We believe that Shrodie will thrive in an adult-only home where there are other cats to help show him the ropes.

Shrodie will be ready to go to his new home just after Halloween. If you’d like to apply to adopt Shrodie, please visit https://victoriapets.ca/adoption-process/ for adoption information and to access our application.