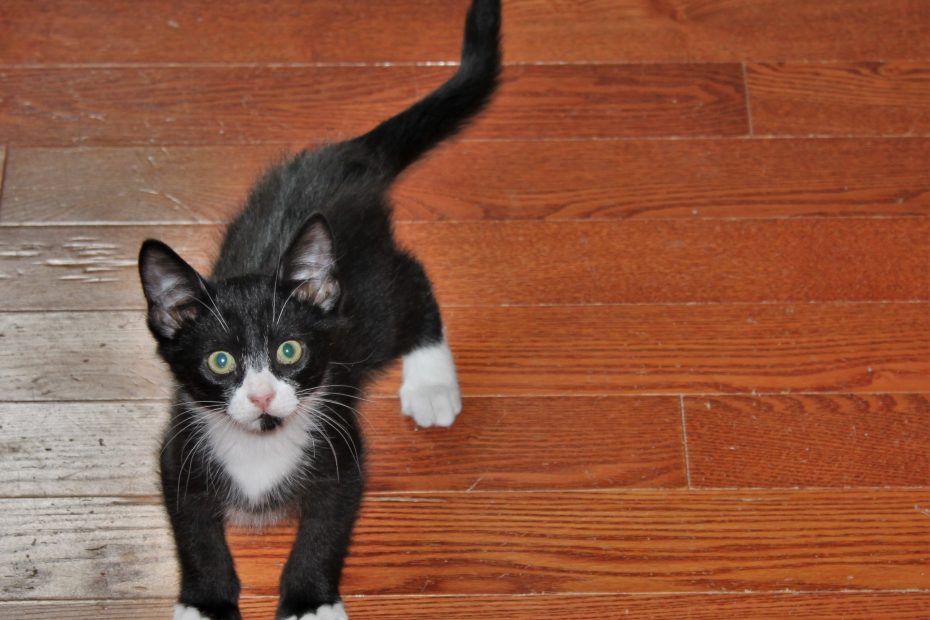 Salvador and his siblings are the sweetest kittens and they’re lucky to be alive. Their mother was a feral cat who is believed to have been hit by a car because one day she started limping very badly. Our rescuers were called in to catch momma (named Trixie) and get her help. After a few days we were able to catch her and take her to the vet. Fortunately for Trixie, her only injury seemed to be a dislocated hip, which was able to be fixed with surgery. Unfortunately, when Trixie was at the vet they discovered that she had engorged mammary glands, which meant that she had nursing-aged kittens somewhere. So our rescuers headed back out to try and find the kittens. Luckily, they were found very quickly and seemed to be in pretty good shape, although at this time they had been without their momma for 3 days at the tender age of 5 weeks old.

Salvador was the second of the kittens to be caught. The kittens were hidden well by their momma under a large pile of wooden debris and garbage, so our rescuers weren’t able to get into where the kittens were hiding. They had to use a humane trap to catch Salvador and it took 24 hours after being found to come out. Salvador was only about 5 weeks old at the time and had to quickly learn how to eat solid food.

Salvador was quite nervous when he first came to us and despite being very young, he wasn’t comfortable being handled for a few weeks after coming into care. He was a nervous nelly. He has since really come out of his shell and is now very sweet and loving, but he’s still a little bit shy with new people and in new spaces.

He spent about a week in a foster home with his sibling and with a cat-savvy dog. Although he wasn’t terrified of the dog, he didn’t really warm up to her much. He may be OK going into a home with a quiet, cat-savvy dog but at this point he will not be comfortable with a high energy dog or playful dog. He would prefer a home with another cat to be his friend.

Salvador likes to play just as any kitten, but he’s a little lower on the energy scale. Once he knows you, he’s quite snuggly and has a really great purr. He is the most cuddly of the 3 kittens. If you have a calm, adult-only home, he will be a wonderful companion. He may be OK with older kids / teens if they have a quiet/gentle personality.

Salvador will be ready to go to his new home just after Halloween. If you’d like to apply to adopt Salvador, please visit https://victoriapets.ca/adoption-process/ for adoption information and to access our application.